I am trying to run ICA on my EEG data but the MNE didn’t have a montage for the EEG system I am using. So, I manually set up montage using EEG channel locations to produce digitized points but it’s not working at all. It’s giving me an error message that no digitization points were found. 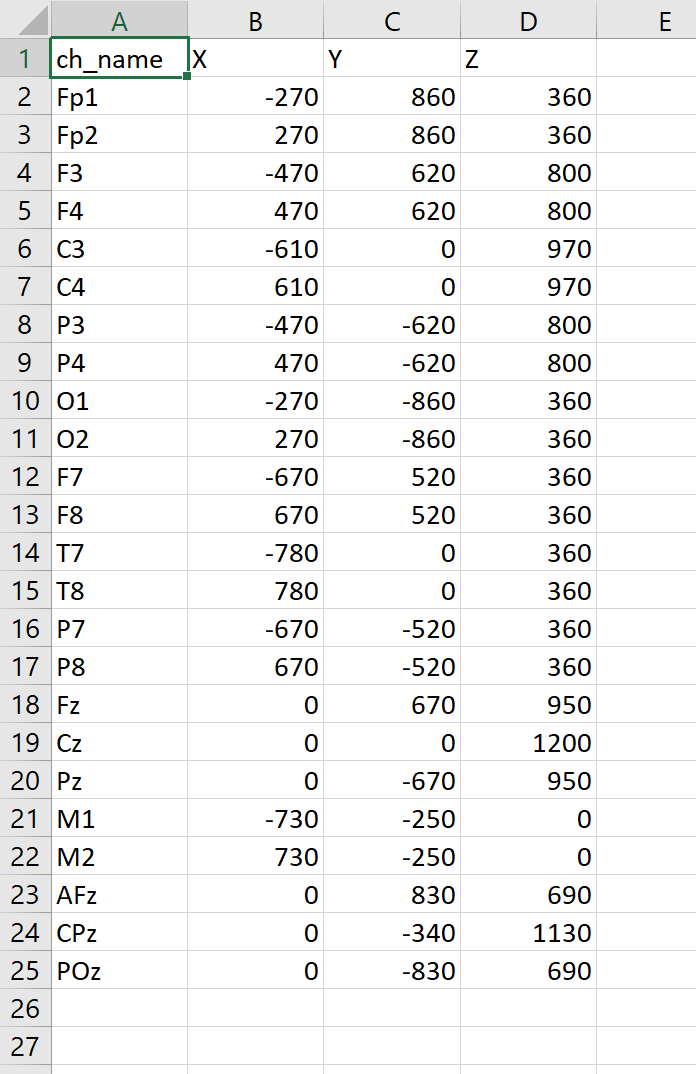 Hello @BilalKhan and welcome to the forum!

Since you seem to be using a standardized electrode placement scheme, and you don’t appear to have individually measured digitization points, I would suggest to simply use one of our built-in standard montages!

So you could do, for example:

(Please replace the quotation marks, I cannot enter the proper ones on my current input device)

For a list of built-in montages, please see the Notes section here:

This whole process will hopefully be slightly less confusing and better documented in the upcoming MNE-Python 1.1 release.

Hi, @richard Thank you for your answer. I tried using the code

command. However, it showed this error, see below:

ValueError: DigMontage is only a subset of info. There are 2 channel positions not present in the DigMontage. The required channels are:

Consider using inst.set_channel_types if these are not EEG channels, or use the on_missing parameter if the channel positions are allowed to be unknown in your analyses.

ValueError: DigMontage is only a subset of info. There are 2 channel positions not present in the DigMontage. The required channels are:

I believe the mastoids are not included in the 10-05 system; if you don’t want to use them in your analysis (and only use them for referencing), you should drop them before setting the montage.

Hi @richard @cbnr @sappelhoff , I tried dropping off the M1 and M2 electrodes from the ICA analysis and the raw.set_montage('easycap-M1') worked as well but still there is an error in plotting ICA components.
I have attached the screenshot of the output I got after setting up the montage to ‘raw’.

Error message is below:

This is not an error, just a (useful!) warning.

Apparently, Cz and AFz have the wrong channel type (misc instead of eeg). This should be corrected via raw.set_channel_types().

Thank you for the help. But it seems I had attached the wrong image of the error message.
I have attached the correct one now. The issue is that even after setting the montage to the raw, the ica components could not be plotted. The error message says ‘no digitization points found’, which should be set up during the setting up of the montage. Is it the wrong assumption of am I missing something here.

Hello, we’d need to see more of your code to figure where things are going wrong.

Are you sure you set the montage before fitting ICA?

Also, electrodes M1 and M2 are typically very close to the positions TP9 and TP10 in the 5%-style systems … so if you don’t want to drop them you can either consider renaming them (messy), or make a your own montage using Compute and plot standard EEG electrode positions — eeg_positions 2.2.0.dev0 documentation … there you can enter M1 and M2 as “aliases” for TP9 and TP10.

Thanks, everyone. Its working now.