I wanted to get people’s thoughts on defacing CT scans for postop ieeg electrodes. It seems it’s not typically done but I do it because I’ve been able to threshold images and get facials features.

Here’s an example of a typical CT scan. 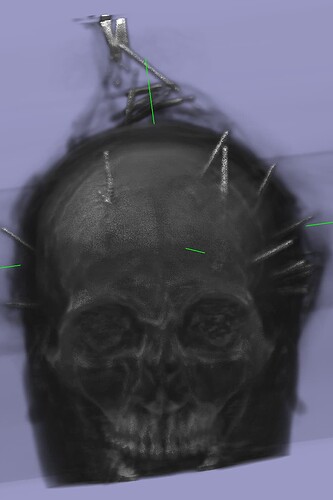 Playing around with thresholds I’m able to generate this 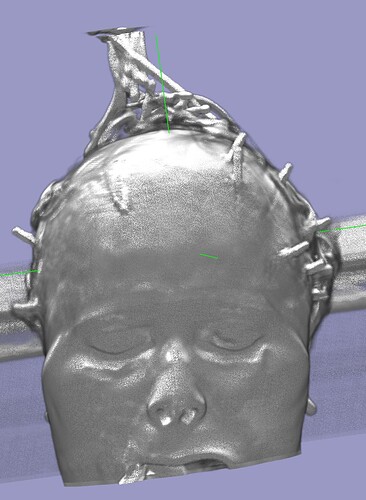 This looks like it has enough facial features like an MRI. However, I’m not sure if mri data has some feature to it, like better representation of soft tissue, that makes it more easy to determine a person’s identity. Anyone have any thoughts on this? Please let me know when you get a chance.

IMO that is recognizable enough that it ought to be defaced before sharing. @alexrockhill is probably the dev who knows the most about CTs and how common/easy it would be to deface them.

Agreed, I had just been looking without thresholds and had just seen the skull reconstruction. Especially since it’s so easy to deface an image, I agree that this definitely should be defaced.

I know it’s easy to miss and sometimes I’ve questioned if it’s worth doing when it’s not usually done but now I feel better about it. For you and anyone else that defaces CT scans for ieeg just some thoughts and tips from my experience.

First, CT scans usually have a minimum voxel value less than 0. Defacing is essentially subtraction and a number subtracted by itself will equal 0. This means voxels that were less than 0 will then become 0. Here’s an example of what I mean.

The min value in this CT scan is -1024. Some voxels that previously had that value are now equal to 0. This make the image look completely different and can affect coregistration. The way to get around this is to first add 1024 (the absolute value of the minimum) to the image and then deface to get something like this:

The second thing I’ve noticed, which is an unfortunate result of defacing, is that the edges created from defacing match the edges from defacing the preop T1w image. Sometimes the coregistration is off because the edges of the defaced area are aligned.

Thanks again for your feedback on this.