I am thinking of working on a project related to dipole localization accuracy for human skull phantom.The phantom containing 32 independently programmable and isolated current dipoles was built to test forward and inverse techniques for EEG and MEG source localization and imaging. The phantom consists of a human skull, impregnated with conducting gelatin, and covered with a 5mm thick scalp layer made from a con- ducting latex compound.

Anybody who’s worked on phantom before, do you have a demo file / jupyter notebook that I can go through and learn from?

Can you also please post the links on how to perform dipole fitting and source localization on phantom from MNE.

Here is the phantom tutorial that replicates what Brainstorm does in MNE Brainstorm CTF phantom dataset tutorial — MNE 1.0.2 documentation. @wmvanvliet also just added this example which I think is a great addition Computing source timecourses with an XFit-like multi-dipole model — MNE 1.1.dev0 documentation

you have this one too

@agramfort @alexrockhill Is there a way to overlay CT scan over MRI on MNE? I require to do it for the project so that I can look at the exact position of the dipoles in the skull phantom.

Also what is the equivalent of dipole scanning method of source localization on MNE? on Brainstorm it is called dipole scanning. is there an equivalent inverse method on MNE because I am required to have 900 dipoles ( one dipole for each spike) for my analysis.

Can you just fit each of the 900 time windows where the spike occurs using Source localization with equivalent current dipole (ECD) fit — MNE 1.1.dev0 documentation?

Just to add to what Alex Gramfort said, you can also overlay the CT and the MR in Freeview which is 3D, the tutorial just shows 2D slice plots because it’s a static html page. I could recommend following the alignment instructions in that tutorial if the CT is not already aligned with the MR.

Hi @alexrockhill, I tried to follow the steps as described in the tutorial. The transform and rotate slide bars on the Tools menu on freeview just doesn’t move the CT image. What I am doing wrong?

Attached is the image 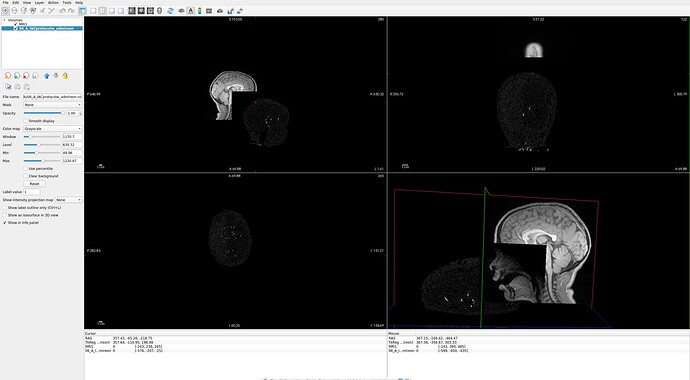 It’s hard to troubleshoot with just an image but it doesn’t look like you have the menu up in your screenshot. Also you want to put the CT on top in the menu on the top left and change the colormap to heat so you can see behind it.

What do you mean by the menu? The transform Volume tool?

Yep, that’s what I mean. Did that help?